Synergy is a great program, marketed and sold by a company called Symless. It's like a network KVM w/ drag&drop files and clipboard support so you can use multiple computers at once. Point being, it also supports SSL encryption - but not for free.
Theres a Basic license for $19 (which from what I can tell does exactly nothing extra from what you already get without paying)
And a Pro license for $29. Pro gives full SSL (TLS through OpenSSL) AES-256 bit security for your connections. AES256-GCM-SHA384 TLSv1.2

You can't even download the free version from their website anymore. But it is Open Source @ https://github.com/symless/synergy-core
EDIT: They have since moved to calling it "Synergy-Core" as Open Source to distinguish from the paid.

It doesnt matter whether you download binaries somewhere (current version is 1.88 stable as of this writing), or compile it yourself (pretty difficult) - because it ends up installing essentially an unregistered, not activated version without SSL.

But we can fix that.... (without even tampering with the program file)!

https://github.com/symless/synergy-core/blob/master/src/lib/shared/SerialKey.cpp#L126 = The SerialKey::toString() definition neatly shows us the basic format of the key.

https://github.com/symless/synergy-core/blob/master/src/lib/shared/SerialKey.cpp#L226 =  The SerialKey::parse() function actually has an example key in the comments, and is showing the validation routine.

This is what we can gather: a string needs to begin and end with a {  } and has 8 semi-colon ; seperated fields (or 9 but we dont want that one - thats for starting a trial of pro). For the last two fields we put 0 for unlimited.

However you cant just paste that in, it needs to be encoded into hex....

I've made it easy, automatic, non-intrusive, anonymous, and not sketchy at all. Visit this online C++ compiler and hit the "RUN" button to run the code (in the cloud) that I've created, (based on the source code). The code runs in the cloud not your machine and is totally safe.  Feed it any values you want for name/email - they dont even have to be real!:
Activation Key Number Generator Script Serial  for Synergy http://cpp.sh/3mjw3

NOW you can paste that Hex code in. Voila, its activated.

You should still donate the company some money when you get the chance so they can continue to provide this great software AND keep it open source.

Note= both machines need to have the license key for SSL handshaking to work, and they both need to be on the same version (or close). The OpenSSL accept fingerprint window will pop up, thats how you know its working. 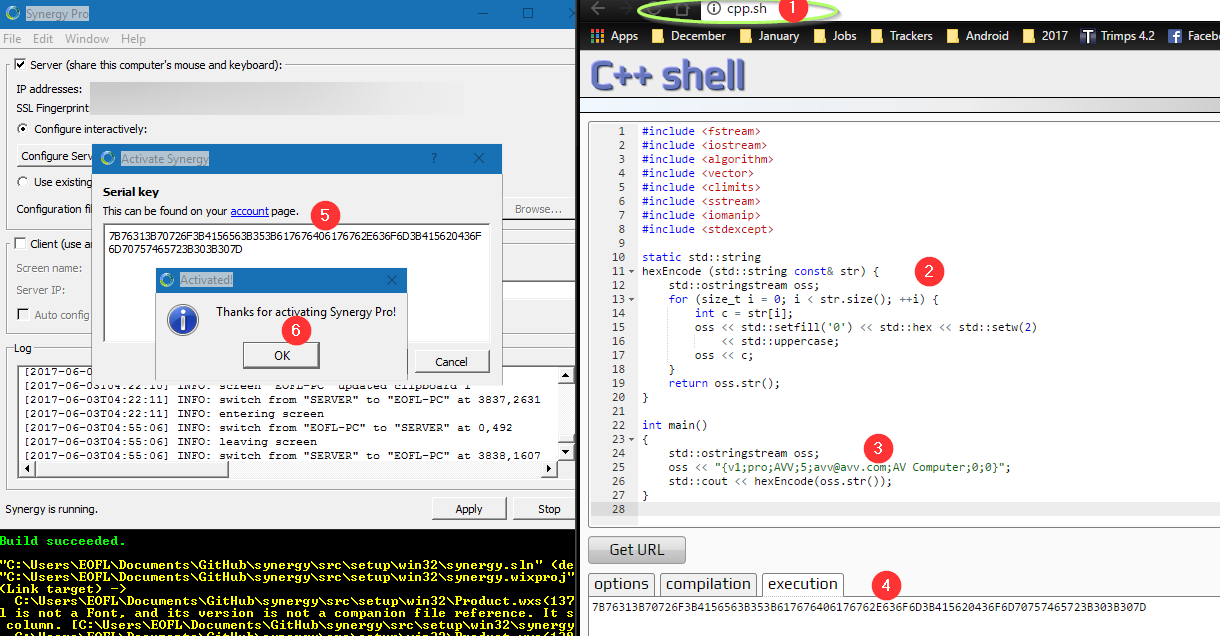 Theres no way they can know, I checked. Unless they read this :) If they do, PM me.
Posted by MrLithium at 9:48 AM

Thanks mate, that work!

Hi, your code pages and links do not work.

Thanks. They didn't even encrypt the activation key.

awesome work, I would like to donate to you, please do synergy 2.0.0 as well. When this program was first made it was always free, even ssh. This is ridiculous and wrong that they are charging 30$. All knowledge , all information should be free, to restrict access is to destroy humanity.

WFT are you ? Very Impressed! Thanks for your sharing.

sophia said...
This comment has been removed by a blog administrator.
12:30 AM

Thank you very much for this.

Works as expected, simple fast and really great! Thumbs UP!

Hi! Great work creating the code. It's really easy to use. However, I can't seem to find a way to install the app. On git I can only find the source code. I tried cloning it even with git bash and can't manage to obtain an executable. How do I install it in the first place? Thanks in advance.

Wow thank you man!! And it works on verison 1.9 too this is the link for 1.9 btw since its not on the page anymore

Thank You so much. Live long.

Unknown said...
This comment has been removed by a blog administrator.
12:48 PM

thank you so much !!! great man

Unknown said...
This comment has been removed by a blog administrator.
10:28 PM

Thank you SOOOO much
Regard from the Netherlands

You're a Legend dude, thank you for this, im just a kid from the Philippines who admire a lot of programmers like you. thanks a lot God bless

Thank you very much!

where should i get .exe